The starburst phenomenon can shape the evolution of the host galaxy and the surrounding intergalactic medium. The extent of the evolutionary impact is partly determined by the duration of the starburst, which has a direct correlation with both the amount of stellar feedback and the development of galactic winds, particularly for smaller mass dwarf systems. We measure the duration of starbursts in twenty nearby, ongoing, and "fossil" starbursts in dwarf galaxies based on the recent star formation histories derived from resolved stellar population data obtained with the Hubble Space Telescope. Contrary to the shorter times of 3-10 Myr often cited, the starburst durations we measure range from 450to650 Myr in fifteen of the dwarf galaxies and up to 1.3 Gyr in four galaxies; these longer durations are comparable to or longer than the dynamical timescales for each system. The same feedback from massive stars that may quench the flickering star formation does not disrupt the overall burst event in our sample of galaxies. While five galaxies present fossil bursts, fifteen galaxies show ongoing bursts and thus the final durations may be longer than we report here for these systems. One galaxy shows a burst that has been ongoing for only 20 Myr we are likely seeing the beginning of a burst event in this system. Using the duration of the starbursts, we calculate that the bursts deposited 1053.9-1057.2 erg of energy into the interstellar medium through stellar winds and supernovae, and produced 3%-26% of the host galaxy's mass.

Based on observations made with the NASA/ESA Hubble Space Telescope, obtained from the Data Archive at the Space Telescope Science Institute, which is operated by the Association of Universities for Research in Astronomy, Inc., under NASA contract NAS 5-26555. 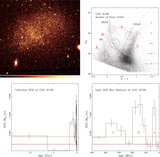