We present new ultraviolet (UV) observations of the luminous compact blue galaxy KISSR242, obtained with the Hubble Space Telescope-Cosmic Origins Spectrograph (HST-COS). We identify multiple resolved sub-arcsecond near-UV sources within the COS aperture. The far-UV spectroscopic data show strong outflow absorption lines, consistent with feedback processes related to an episode of massive star formation. O I, C II, and Si II-Si IV are observed with a mean outflow velocity langv outrang = -60 km s-1. We also detect faint fine-structure emission lines of singly ionized silicon for the first time in a low-redshift starburst galaxy. These emissions have been seen previously in deep Lyman break galaxy surveys at z ~ 3. The Si II* lines are at the galaxy rest velocity, and they exhibit a quantitatively different line profile from the absorption features. These lines have a width of ≈75 km s-1, too broad for point-like emission sources such as the H II regions surrounding individual star clusters. The size of the Si II* emitting region is estimated to be ≈250 pc. We discuss the possibility of this emission arising in overlapping super star cluster H II regions, but find this explanation to be unlikely in light of existing far-UV observations of local star-forming galaxies. We suggest that the observed Si II* emission originates in a diffuse warm halo populated by interstellar gas driven out by intense star formation and/or accreted during a recent interaction that may be fueling the present starburst episode in KISSR242.

Based on observations made with the NASA/ESA Hubble Space Telescope, obtained from the data archive at the Space Telescope Science Institute. STScI is operated by the Association of Universities for Research in Astronomy, Inc. under NASA contract NAS 5-26555. 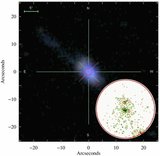