The Mass Profile of the Galaxy to 80 kpc

The Hypervelocity Star Survey presents the currently largest sample of radial velocity measurements of halo stars out to 80 kpc. We apply spherical Jeans modeling to these data in order to derive the mass profile of the Galaxy. We restrict the analysis to distances larger than 25 kpc from the Galactic center, where the density profile of halo stars is well approximated by a single power law with logarithmic slope between -3.5 and -4.5. With this restriction, we also avoid the complication of modeling a flattened Galactic disk. In the range 25 kpc < r < 80 kpc, the radial velocity dispersion declines remarkably little; a robust measure of its logarithmic slope is between -0.05 and -0.1. The circular velocity profile also declines remarkably little with radius. The allowed range of Vc (80 kpc) lies between 175 and 231 km s-1, with the most likely value of 193 km s-1. Compared with the value at the solar location, the Galactic circular velocity declines by less than 20% over an order of magnitude in radius. Such a flat profile requires a massive and extended dark matter halo. The mass enclosed within 80 kpc is 6.9+3.0 -1.2 × 1011 M sun. Our sample of radial velocities is large enough that the biggest uncertainty in the mass is not statistical but systematic, dominated by the density slope and anisotropy of the tracer population. Further progress requires modeling observed data sets within realistic simulations of galaxy formation. 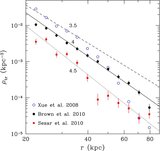