The Sphericalization of Dark Matter Halos by Galaxy Disks

Cosmological simulations indicate that cold dark matter (CDM) halos should be triaxial. Validating this theoretical prediction is, however, less than straightforward because the assembly of galaxies is expected to modify halo shapes and to render them more axisymmetric. We use a suite of N-body simulations to quantitatively investigate the effect of the growth of a central disk galaxy on the shape of triaxial dark matter halos. In most circumstances, the halo responds to the presence of the disk by becoming more spherical. The net effect depends weakly on the timescale of the disk assembly but noticeably on the orientation of the disk relative to the halo principal axes, and it is maximal when the disk symmetry axis is aligned with the major axis of the halo. The effect depends most sensitively on the overall gravitational importance of the disk. Our results indicate that exponential disks whose contribution peaks at less than ~50% of their circular velocity are unable to noticeably modify the shape of the gravitational potential of their surrounding halos. Many dwarf and low surface brightness galaxies are expected to be in this regime, and therefore their detailed kinematics could be used to probe halo triaxiality, one of the basic predictions of the CDM paradigm. We argue that the complex disk kinematics of the dwarf galaxy NGC 2976 might be the reflection of a triaxial halo. Such signatures of halo triaxiality should be common in galaxies where the luminous component is subdominant. 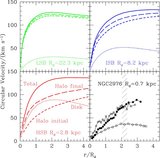