We have gathered optical photometry data from the literature on a large sample of Swift-era gamma-ray burst (GRB) afterglows including GRBs up to 2009 September, for a total of 76 GRBs, and present an additional three pre-Swift GRBs not included in an earlier sample. Furthermore, we publish 840 additional new photometry data points on a total of 42 GRB afterglows, including large data sets for GRBs 050319, 050408, 050802, 050820A, 050922C, 060418, 080413A, and 080810. We analyzed the light curves of all GRBs in the sample and derived spectral energy distributions for the sample with the best data quality, allowing us to estimate the host-galaxy extinction. We transformed the afterglow light curves into an extinction-corrected z = 1 system and compared their luminosities with a sample of pre-Swift afterglows. The results of a former study, which showed that GRB afterglows clustered and exhibited a bimodal distribution in luminosity space, are weakened by the larger sample. We found that the luminosity distribution of the two afterglow samples (Swift-era and pre-Swift) is very similar, and that a subsample for which we were not able to estimate the extinction, which is fainter than the main sample, can be explained by assuming a moderate amount of line-of-sight host extinction. We derived bolometric isotropic energies for all GRBs in our sample, and found only a tentative correlation between the prompt energy release and the optical afterglow luminosity at 1 day after the GRB in the z = 1 system. A comparative study of the optical luminosities of GRB afterglows with echelle spectra (which show a high number of foreground absorbing systems) and those without, reveals no indication that the former are statistically significantly more luminous. Furthermore, we propose the existence of an upper ceiling on afterglow luminosities and study the luminosity distribution at early times, which was not accessible before the advent of the Swift satellite. Most GRBs feature afterglows that are dominated by the forward shock from early times on. Finally, we present the first indications of a class of long GRBs, which form a bridge between the typical high-luminosity, high-redshift events and nearby low-luminosity events (which are also associated with spectroscopic supernovae) in terms of energetics and observed redshift distribution, indicating a continuous distribution overall.

Based in part on observations obtained with the Very Large Telescope under ESO program 075.D-0787, PI Tagliaferri. Also based partly on observations made with the Italian Telescopio Nazionale Galileo (TNG) operated on the island of La Palma by the Fundación Galileo Galilei of the INAF (Istituto Nazionale di Astrofisica) at the Spanish Observatorio del Roque de los Muchachos of the Instituto de Astrofisica de Canarias under program TAC 1238. 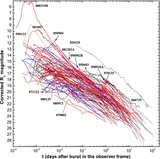