VLBA Determination of the Distance to Nearby Star-forming Regions. IV. A Preliminary Distance to the Proto-Herbig AeBe Star EC 95 in the Serpens Core

Using the Very Long Base Array, we observed the young stellar object EC 95 in the Serpens cloud core at eight epochs from 2007 December to 2009 December. Two sources are detected in our field and are shown to form a tight binary system. The primary (EC 95a) is a 4-5 M sun proto-Herbig AeBe object (arguably the youngest such object known), whereas the secondary (EC 95b) is most likely a low-mass T Tauri star. Interestingly, both sources are non-thermal emitters. While T Tauri stars are expected to power a corona because they are convective while they go down the Hayashi track, intermediate-mass stars approach the main sequence on radiative tracks. Thus, they are not expected to have strong superficial magnetic fields, and should not be magnetically active. We review several mechanisms that could produce the non-thermal emission of EC 95a and argue that the observed properties of EC 95a might be most readily interpreted if it possessed a corona powered by a rotation-driven convective layer. Using our observations, we show that the trigonometric parallax of EC 95 is π = 2.41 ± 0.02 mas, corresponding to a distance of 414.9+4.4 -4.3 pc. We argue that this implies a distance to the Serpens core of 415 ± 5 pc and a mean distance to the Serpens cloud of 415 ± 25 pc. This value is significantly larger than previous estimates (d ~ 260 pc) based on measurements of the extinction suffered by stars in the direction of Serpens. A possible explanation for this discrepancy is that these previous observations picked out foreground dust clouds associated with the Aquila Rift system rather than Serpens itself. 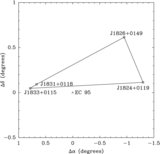