We expand on the results of Nielsen et al., using the null result for giant extrasolar planets around the 118 target stars from the Very Large Telescope (VLT) NACO H- and Ks-band planet search (conducted by Masciadri and collaborators in 2003 and 2004), the VLT and MMT Simultaneous Differential Imager survey, and the Gemini Deep Planet Survey to set constraints on the population of giant extrasolar planets. Our analysis is extended to include the planet luminosity models of Fortney et al., as well as the correlation between stellar mass and frequency of giant planets found by Johnson et al. Doubling the sample size of FGKM stars strengthens our conclusions: a model for extrasolar giant planets with power laws for mass and semimajor axis as given by Cumming et al. cannot, with 95% confidence, have planets beyond 65 AU, compared to the value of 94 AU reported by Nielsen et al., using the models of Baraffe et al. When the Johnson et al. correction for stellar mass (which gives fewer Jupiter-mass companions to M stars with respect to solar-type stars) is applied, however, this limit moves out to 82 AU. For the relatively new Fortney et al. models, which predict fainter planets across most of parameter space, these upper limits, with and without a correction for stellar mass, are 182 and 234 AU, respectively. 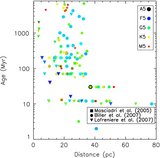