A Chandra Study of the Rosette Star-forming Complex. III. The NGC 2237 Cluster and the Region's Star Formation History

We present high spatial resolution Chandra X-ray images of the NGC 2237 young stellar cluster on the periphery of the Rosette Nebula. We detect 168 X-ray sources, 80% of which have stellar counterparts in USNO, Two Micron All Sky Survey, and deep FLAMINGOS images. These constitute the first census of the cluster members with 0.2 <~ M <~ 2 M sun. Star locations in near-infrared color-magnitude diagrams indicate a cluster age around 2 Myr with a visual extinction of 1 <~ AV <~ 3 at 1.4 kpc, the distance of the Rosette Nebula's main cluster NGC 2244. We derive the K-band luminosity function and the X-ray luminosity function of the cluster, which indicate a population ~400-600 stars. The X-ray-selected sample shows a K-excess disk frequency of 13%. The young Class II counterparts are aligned in an arc ~3 pc long suggestive of a triggered formation process induced by the O stars in NGC 2244. The diskless Class III sources are more dispersed. Several X-ray emitting stars are located inside the molecular cloud and around gaseous pillars projecting from the cloud. These stars, together with a previously unreported optical outflow originating inside the cloud, indicate that star formation is continuing at a low level and the cluster is still growing. This X-ray view of young stars on the western side of the Rosette Nebula complements our earlier studies of the central cluster NGC 2244 and the embedded clusters on the eastern side of the Nebula. The large-scale distribution of the clusters and molecular material is consistent with a scenario in which the rich central NGC 2244 cluster formed first, and its expanding H II region triggered the formation of the now-unobscured satellite clusters Rosette Molecular Cloud (RMC) XA and NGC 2237. A large swept-up shell material around the H II region is now in a second phase of collect-and-collapse fragmentation, leading to the recent formation of subclusters. Other clusters deeper in the molecular cloud appear unaffected by the Rosette Nebula expansion. 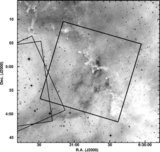