Observation of Kink Instability During Small B5.0 Solar Flare on 2007 June 4

Using multi-wavelength observations of SOHO/MDI, SOT-Hinode/blue-continuum (4504 Å), G band (4305 Å), Ca II H (3968 Å), and TRACE 171 Å, we present the observational signature of a highly twisted magnetic loop in AR 10960 during the period 04:43 UT-04:52 UT on 2007 June 4. SOT-Hinode/blue-continuum (4504 Å) observations show that penumbral filaments of positive polarity sunspot have counterclockwise twist, which may be caused by the clockwise rotation of the spot umbrae. The coronal loop, whose one footpoint is anchored in this sunspot, shows strong right-handed twist in chromospheric SOT-Hinode/Ca II H (3968 Å) and coronal TRACE 171 Å images. The length and the radius of the loop are L ~ 80 Mm and a ~ 4.0 Mm, respectively. The distance between neighboring turns of magnetic field lines (i.e., pitch) is estimated as ≈10 Mm. The total twist angle, Φ ~ 12π (estimated for the homogeneous distribution of the twist along the loop), is much larger than the Kruskal-Shafranov instability criterion. We detected clear double structure of the loop top during 04:47 UT-04:51 UT on TRACE 171 Å images, which is consistent with simulated kink instability in curved coronal loops. We suggest that the kink instability of this twisted magnetic loop triggered a B5.0 class solar flare, which occurred between 04:40 UT and 04:51 UT in this active region.

In honor of Prof. B. N. Dwivedi, Dept. of Applied Physics, Banaras Hindu University, Varanasi, India, on his 60th birthday. 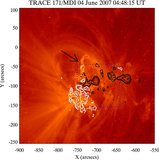