Lithium and Proton-capture Elements in Globular Cluster Dwarfs: The Case of 47 TUC

Previous surveys in a few metal-poor globular clusters (GCs) showed that the determination of abundances for Li and proton-capture elements offers a key tool to address the intracluster pollution scenario. In this Letter, we present Na, O, and Li abundances in a large sample of dwarf stars in the metal-rich GC 47 Tucanae. We found a clear Na-O anticorrelation, in good agreement with what obtained for giant members by Carretta et al. While lithium and oxygen abundances appear to be positively correlated with each other, there is a large scatter, well exceeding observational errors, and no anticorrelation with sodium. These findings suggest that Li depletion, due to mechanisms internal to the stars (which are cooler and more metal-rich than those on the Spite plateau), combines with the usual pollution scenario responsible for the Na-O anticorrelation. 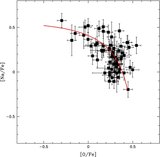