Many of the most exciting questions in astrophysics and cosmology, including the majority of observational probes of dark energy, rely on an understanding of the nonlinear regime of structure formation. In order to fully exploit the information available from this regime and to extract cosmological constraints, accurate theoretical predictions are needed. Currently, such predictions can only be obtained from costly, precision numerical simulations. This paper is the third in a series aimed at constructing an accurate calibration of the nonlinear mass power spectrum on Mpc scales for a wide range of currently viable cosmological models, including dark energy models with w ≠ -1. The first two papers addressed the numerical challenges and the scheme by which an interpolator was built from a carefully chosen set of cosmological models. In this paper, we introduce the "Coyote Universe" simulation suite which comprises nearly 1000 N-body simulations at different force and mass resolutions, spanning 38 w CDM cosmologies. This large simulation suite enables us to construct a prediction scheme, or emulator, for the nonlinear matter power spectrum accurate at the percent level out to k ~= 1 h Mpc-1. We describe the construction of the emulator, explain the tests performed to ensure its accuracy, and discuss how the central ideas may be extended to a wider range of cosmological models and applications. A power spectrum emulator code is released publicly as part of this paper. 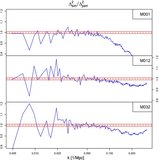