We use abundances of Ca, O, Na, and Al from high-resolution UVES spectra of 200 red giants in 17 globular clusters (GCs) to investigate the correlation found by Lee et al. between chemical enrichment from SN II and star-to-star variations in light elements in GC stars. We find that (1) the [Ca/H] variations between first and second generation stars are tiny in most GCs (~0.02-0.03 dex, comparable with typical observational errors). In addition, (2) using a large sample of red giants in M 4 with abundances from UVES spectra from Marino et al., we find that Ca and Fe abundances in the two populations of Na-poor and Na-rich stars are identical. These facts suggest that the separation seen in color-magnitude diagrams using the U band or hk index (as observed in NGC 1851 by Han et al.) are not due to Ca variations. Small differences in [Ca/H] as associated with hk variations might be due to a small systematic effect in abundance analysis, because most O-poor/Na-rich (He-rich) stars have slightly larger [Fe/H] (by 0.027 dex on average, due to decreased H in the ratio) than first generation stars and are then located at redder positions in the V, hk plane. While a few GCs (M 54, ω Cen, M 22, maybe even NGC 1851) do actually show various degree of metallicity spread, our findings eliminate the need of a close link between the enrichment by core-collapse supernovae with the mechanism responsible for the Na-O anticorrelation. 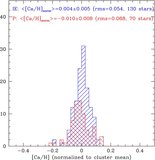