Time-resolved low resolution Hubble Space Telescope ultraviolet spectra together with ground-based optical photometry and spectra are used to constrain the temperatures and pulsation properties of six cataclysmic variables containing pulsating white dwarfs (WDs). Combining our temperature determinations for the five pulsating WDs that are several years past outburst with past results on six other systems shows that the instability strip for accreting pulsating WDs ranges from 10,500 to 15,000 K, a wider range than evident for ZZ Ceti pulsators. Analysis of the UV/optical pulsation properties reveals some puzzling aspects. While half the systems show high pulsation amplitudes in the UV compared to their optical counterparts, others show UV/optical amplitude ratios that are less than one or no pulsations at either wavelength region. 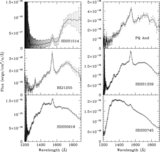