We determine an absolute calibration of the initial mass function (IMF) of early-type galaxies, by studying a sample of 56 gravitational lenses identified by the Sloan Lenses ACS Survey. Under the assumption of standard Navarro, Frenk, and White dark matter halos, a combination of lensing, dynamical, and stellar population synthesis models is used to disentangle the stellar and dark matter contribution for each lens. We define an "IMF mismatch" parameter α≡M LD *,Ein/M SPS *,Ein as the ratio of stellar mass inferred by a joint lensing and dynamical model (M LD *,Ein) to the current stellar mass inferred from stellar populations synthesis models (M SPS *,Ein). We find that a Salpeter IMF provides stellar masses in agreement with those inferred by lensing and dynamical models (langlog αrang = -0.00 ± 0.03 ± 0.02), while a Chabrier IMF underestimates them (langlog αrang = 0.25 ± 0.03 ± 0.02). A tentative trend is found, in the sense that α appears to increase with galaxy velocity dispersion. Taken at face value, this result would imply a non-universal IMF, perhaps dependent on metallicity, age, or abundance ratios of the stellar populations. Alternatively, the observed trend may imply non-universal dark matter halos with inner density slope increasing with velocity dispersion. While the degeneracy between the two interpretations cannot be broken without additional information, the data imply that massive early-type galaxies cannot have both a universal IMF and universal dark matter halos.

Based on observations made with the NASA/ESA Hubble Space Telescope, obtained at the Space Telescope Science Institute, which is operated by the Association of Universities for Research in Astronomy, Inc., under NASA contract NAS 5-26555. These observations are associated with programs 10174, 10587, 10886, 10494, 10798, and 11202. 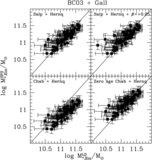