We investigate the RR Lyrae (RRL) population in NGC 147, a dwarf satellite galaxy of M31 (Andromeda). We used both Thuan-Gunn g-band ground-based photometry from the literature and Hubble Space Telescope Wide Field Planetary Camera 2 archival data in the F555W and F814W passbands to investigate the pulsation properties of RRL variable candidates in NGC 147. These data sets represent the two extreme cases often found in RRL studies with respect to the phase coverage of the observations and the quality of the photometric measurements. Extensive artificial variable star tests for both cases were performed. We conclude that neither data set is sufficient to confidently determine the pulsation properties of the NGC 147 RRLs. Thus, while we can assert that NGC 147 contains RRL variables, and therefore a population older than ~10 Gyr, it is not possible at this time to use the pulsation properties of these RRLs to study other aspects of this old population. Our results provide a good reference for gauging the completeness of RRL variable detection in future studies. 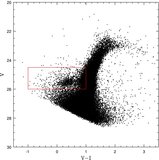