We present photometry of 104 M31 globular clusters (GCs) and GC candidates in 15 intermediate-band filters of the Beijing-Arizona-Taiwan-Connecticut photometric system. The GCs and GC candidates were selected from the Revised Bologna Catalog (v.3.5). We obtain the cluster ages by comparing the photometric data with up-to-date theoretical synthesis models. The photometric data used are Galaxy Evolution Explorer far- and near-ultraviolet and Two Micron All Sky Survey near-infrared JHK s magnitudes, combined with optical photometry. The ages of our sample clusters cover a large range, although most clusters are younger than 10 Gyr. Combined with the ages obtained in our series of previous papers focusing on the M31 GC system, we present the full M31 GC age distribution. The M31 GC system contains populations of young and intermediate-age GCs, as well as the "usual" complement of well-known old GCs, i.e., GCs of similar age as the majority of the Galactic GCs. In addition, young GCs (and GC candidates) are distributed nearly uniformly in radial distance from the center of M31, while most old GCs (and GC candidates) are more strongly concentrated. 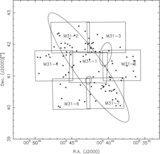