We present Hubble Space Telescope photometry of young stars in NGC 5102, a nearby gas-rich post-starburst S0 galaxy with a bright young stellar nucleus. We use the IAC-pop/MinnIAC algorithm to derive the recent star formation history in three fields in the bulge and disk of NGC 5102. In the disk fields, the recent star formation rate has declined monotonically and is now barely detectable, but a starburst is still in progress in the bulge and has added about 2% to the mass of the bulge over the last 200 Myr. Other studies of star formation in NGC 5102 indicate that about 20% of its stellar mass was added over the past Gyr. If this is correct, then much of the stellar mass of the bulge may have formed over this period. It seems likely that this star formation was fueled by the accretion of a gas-rich system with H I mass of about 2 × 109 M sun, which has now been almost completely converted into stars. The large mass of recently formed stars and the blue colors of the bulge suggest that the current starburst, which is now fading, may have made a significant contribution to building the bulge of NGC 5102.

Based on observations with the NASA/ESA Hubble Space Telescope, obtained at the Space Telescope Science Institute, which is operated by the Association of Universities for Research in Astronomy (AURA), Inc., under NASA Contract NAS 5-26555. 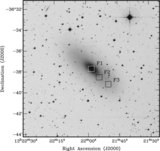