We present analysis of the photometry of more than 900 Kreutz comets observed by SOHO from 1996 to 2005. The Kreutz comets have "sungrazing" orbits with q≈ 1-2 R sun, high inclinations (i ≈ 143°), and periods of 500-1000 years. We find that they do not have a bimodal distance of peak brightness as previously reported, but instead peak from 10.5 R sun to 14 R sun (prior to perihelion), suggesting there is a continuum of compositions rather than two distinct subpopulations. The light curves have two rates of brightening, typically vprop r -7.3 ± 2.0 when first observed by SOHO (at distances of 30-35 R sun) then rapidly transitioning to vprop r -3.8 ± 0.7 between 20 R sun and 30 R sun. It is unclear at what distance the steeper slope begins, but it likely does not extend much beyond the SOHO field of view. We derive nuclear sizes up to ~50 m in radius for the SOHO-observed comets, with a cumulative size distribution of N(>R) vprop R -2.2 for comets larger than 5 m in radius. This size distribution cannot explain the largest members of the family seen from the ground, suggesting that either the size distribution does not extend to the largest sizes or that the distribution is not uniform around the orbit. The total mass of the distribution up to the largest expected size (~500 m) is ~4 × 1014 g, much less than the estimated masses of the largest ground-observed members. After correcting for the changing discovery circumstances, the flux of comets reaching perihelion has increased since 1996, and the increase is seen in comets of all sizes. Comparison of the SOHO comets with the Solwind and Solar Maximum Mission discoveries suggests there may have been an overabundance of bright comets arriving from 1979 to 1989, possibly indicative of a changing distribution around the Kreutz orbit. 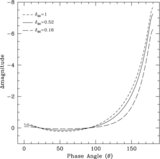