The handful of low-mass, late-type galaxies that comprise Hickson Compact Group 31 (HCG 31) is in the midst of complex, ongoing gravitational interactions, evocative of the process of hierarchical structure formation at higher redshifts. With sensitive, multicolor Hubble Space Telescope imaging, we characterize the large population of < 10 Myr old star clusters (SCs) that suffuse the system. From the colors and luminosities of the young SCs, we find that the galaxies in HCG 31 follow the same universal scaling relations as actively star-forming galaxies in the local universe despite the unusual compact group environment. Furthermore, the specific frequency of the globular cluster system is consistent with the low end of galaxies of comparable masses locally. This, combined with the large mass of neutral hydrogen and tight constraints on the amount of intragroup light, indicate that the group is undergoing its first epoch of interaction-induced star formation. In both the main galaxies and the tidal-dwarf candidate, F, stellar complexes, which are sensitive to the magnitude of disk turbulence, have both sizes and masses more characteristic of z = 1-2 galaxies. After subtracting the light from compact sources, we find no evidence for an underlying old stellar population in F—it appears to be a truly new structure. The low-velocity dispersion of the system components, available reservoir of H I, and current star formation rate of ~10 M sun yr-1 indicate that HCG 31 is likely to both exhaust its cold gas supply and merge within ~1 Gyr. We conclude that the end product will be an isolated, X-ray-faint, low-mass elliptical.

Based on observations made with the NASA/ESA Hubble Space Telescope. 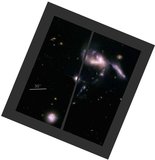