We characterize the crystalline-silicate content and spatial distribution of small dust grains in a large sample of protoplanetary disks in the Taurus-Auriga young cluster, using the Spitzer Space Telescope mid-IR spectra. In turn we use the results to analyze the evolution of structure and composition of these 1-2 Myr old disks around Solar- and later-type young stars, and test the standard models of dust processing which result in the conversion of originally amorphous dust into minerals. We find strong evidence of evolution of the dust-crystalline mass fraction in parallel with that of the structure of the disks, in the sense that increasing crystalline mass fraction is strongly linked to dust settling to the disk midplane. We also confirm that the crystalline silicates are confined to small radii, r lsim 10 AU. However, we see no significant correlation of crystalline mass fraction with stellar mass or luminosity, stellar-accretion rate, disk mass, or disk/star mass ratio, as would be expected in the standard models of dust processing based upon photoevaporation and condensation close to the central star, accretion-heating-driven annealing at r lsim 1 AU, or spiral-shock heating at r lsim 10 AU, with or without effective large-scale radial mixing mechanisms. Either another grain-crystallizing mechanism dominates over these, or another process must be at work within the disks to erase the correlations they produce. We propose one of each sort that seems to be worth further investigation, namely X-ray heating and annealing of dust grains, and modulation of disk structure by giant-planetary formation and migration. 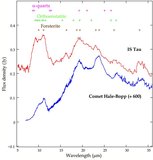