Discovery of Fog at the South Pole of Titan

While Saturn's moon Titan appears to support an active methane hydrological cycle, no direct evidence for surface-atmosphere exchange has yet appeared. The indirect evidence, while compelling, could be misleading. It is possible, for example, that the identified lake features could be filled with ethane, an involatile long-term residue of atmospheric photolysis; the apparent stream and channel features could be ancient remnants of a previous climate; and the tropospheric methane clouds, while frequent, could cause no rain to reach the surface. We report here the detection of fog at the south pole of Titan during late summer using observations from the VIMS instrument on board the Cassini spacecraft. While terrestrial fog can form from a variety of causes, most of these processes are inoperable on Titan. Fog on Titan can only be caused by evaporation of nearly pure liquid methane; the detection of fog provides the first direct link between surface and atmospheric methane. Based on the detections presented here, liquid methane appears widespread at the south pole of Titan in late southern summer, and the hydrological cycle on Titan is currently active. 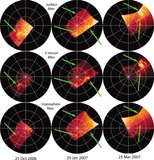