We present a differential emission measure (DEM) analysis of the quiet solar corona on disk using data obtained by the Extreme-ultraviolet Imaging Spectrometer (EIS) on Hinode. We show that the expected quiet-Sun DEM distribution can be recovered from judiciously selected lines, and that their average intensities can be reproduced to within 30%. We present a subset of these selected lines spanning the temperature range log T = 5.6-6.4 K that can be used to derive the DEM distribution reliably, including a subset of iron lines that can be used to derive the DEM distribution free of the possibility of uncertainties in the elemental abundances. The subset can be used without the need for extensive measurements, and the observed intensities can be reproduced to within the estimated uncertainty in the pre-launch calibration of EIS. Furthermore, using this subset, we also demonstrate that the quiet coronal DEM distribution can be recovered on size scales down to the spatial resolution of the instrument (1'' pixels). The subset will therefore be useful for studies of small-scale spatial inhomogeneities in the coronal temperature structure, for example, in addition to studies requiring multiple DEM derivations in space or time. We apply the subset to 45 quiet-Sun data sets taken in the period 2007 January to April, and show that although the absolute magnitude of the coronal DEM may scale with the amount of released energy, the shape of the distribution is very similar up to at least log T ~ 6.2 K in all cases. This result is consistent with the view that the shape of the quiet-Sun DEM is mainly a function of the radiating and conducting properties of the plasma and is fairly insensitive to the location and rate of energy deposition. This universal DEM may be sensitive to other factors such as loop geometry, flows, and the heating mechanism, but if so they cannot vary significantly from quiet-Sun region to region. 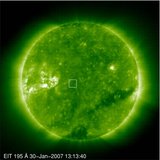