A Spitzer/IRS Spectrum of the 2008 Luminous Transient in NGC 300: Connection to Proto-Planetary Nebulae

We present a Spitzer/IRS low-resolution mid-infrared (mid-IR) spectrum (5-14 μm) of the luminous transient discovered in the nearby galaxy NGC 300 in 2008 May. This transient had peak luminosity MV sime -13, showed an optical spectrum dominated by relatively narrow Balmer and Ca II lines in emission, and its progenitor was identified in pre-explosion images as a dust-enshrouded ~10 M sun star, characteristics that make it a twin of SN 2008S. The Spitzer spectrum, obtained three months after discovery, shows that the transient is very luminous in the mid-IR. Furthermore, the spectrum shows strong, broad emission features at 8 μm and 12 μm that are observed in Galactic carbon-rich proto-planetary nebulae. Combining these data with published optical and near-IR photometry obtained at the same epoch, we find that the mid-IR excess traced by the Spitzer spectrum accounts for ~20% of the total energy output. This component can be well explained by emission from ~3 × 10-4 M sun of pre-existing progenitor dust at temperature T ~ 400 K. The spectral energy distribution of the transient also shows a near-IR excess that can be explained by emission from newly formed dust in the ejecta. Alternatively, both the near-IR and mid-IR excesses can together be explained by a single pre-existing geometrically thick dust shell. In light of the new observations obtained with Spitzer, we revisit the analysis of the optical spectra and kinematics, which were compared to the massive yellow-hypergiant IRC+10420 in previous studies. We show that proto-planetary nebulae share many properties with the NGC 300 transient and SN 2008S. We conclude that even though the explosion of a massive star (M gsim 10 M sun) cannot be ruled out, an explosive event on a massive (M ~ 6-10 M sun) carbon-rich AGB/super-AGB or post-AGB star is consistent with all observations of the transients and their progenitors presented thus far. 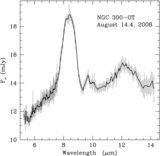