Using the High Dispersion Spectrograph (HDS) at the Subaru Telescope, we secured the high-resolution line spectra in the 3600-7500 Å wavelength range of the Galactic halo planetary nebula DdDm 1. We also analyzed the Hubble Space Telescope Faint Object Spectrograph data in the 1200-6730 Å wavelength range. The diagnostic results indicate the electron temperatures of T epsilon~ 11,000-14,000 K and the electron number densities of N epsilon~ 2000-10,500 cm-3. In spite of high gaseous temperatures, we have not detected high excitation lines, e.g., He II. We derived abundance based on the ionic concentration of permitted and forbidden lines and the photoionization model. A comparison of the ionic concentrations from forbidden lines to recombination lines shows the abundance discrepancy between them. We tested various possibilities, e.g., temperature fluctuation and high-density blob components, to explain the discrepancy. The high-density components or density fluctuation might be partly responsible for the discrepancy. DdDm 1 shows a low carbon abundance that corresponds to metal-poor stars, [Fe/H] <=-1. Assuming a distance of 10 kpc to DdDm 1, theoretical models suggest that the central star has T effsime 39,000 K and Lsime 2000-3000 L sun. The relatively high gas temperatures appear to be caused by very low heavy elemental abundances or insufficient coolants in the shell gas. Its progenitor, born in an extremely carbon-poor environment as an initial mass of about 0.9 M sun, had probably experienced only the first dredge-up.

Based on data collected at the Subaru Telescope, which is operated by the National Astronomical Observatory of Japan. Prop. ID S05B-178S (M. Otsuka). 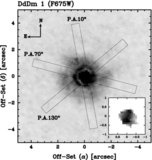