The Lyα emission line is an essential diagnostic tool for probing galaxy formation and evolution. Not only is it commonly the strongest observable line from high-redshift galaxies, but from its shape detailed information about its host galaxy can be revealed. However, due to the scattering nature of Lyα photons increasing their path length in a nontrivial way, if dust is present in the galaxy, the line may be severely suppressed and its shape altered. In order to interpret observations correctly, it is thus of crucial significance to know how much of the emitted light actually escapes the galaxy. In the present work, using a combination of high-resolution cosmological hydrosimulations and an adaptively refinable Monte Carlo Lyα radiative transfer code including an environment dependent model of dust, the escape fractions f esc of Lyα radiation from high-redshift (z = 3.6) galaxies are calculated. In addition to the average escape fraction, the variation of f esc in different directions and from different parts of the galaxies is investigated, as well as the effect on the emergent spectrum. Escape fractions from a sample of simulated galaxies of representative physical properties are found to decrease for increasing galaxy virial mass M vir, from f esc approaching unity for M vir ~ 109 M sun to f esc less than 10% for M vir ~ 1012 M sun. In spite of dust being almost gray, it is found that the emergent spectrum is affected nonuniformly, with the escape fraction of photons close to the line center being much higher than of those in the wings, thus effectively narrowing the Lyα line. 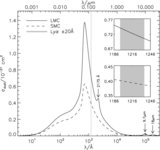