We present mid-infrared (MIR) observations of the Type II-plateau supernova (SN) 2004et, obtained with the Spitzer Space Telescope between 64 and 1406 days past explosion. Late-time optical spectra are also presented. For the period 300-795 days past explosion, we argue that the spectral energy distribution (SED) of SN 2004et comprises (1) a hot component due to emission from optically thick gas, as well as free-bound radiation; (2) a warm component due to newly formed, radioactively heated dust in the ejecta; and (3) a cold component due to an IR echo from the interstellar-medium dust of the host galaxy, NGC 6946. There may also have been a small contribution to the IR SED due to free-free emission from ionized gas in the ejecta. We reveal the first-ever spectroscopic evidence for silicate dust formed in the ejecta of a supernova. This is supported by our detection of a large, but progressively declining, mass of SiO. However, we conclude that the mass of directly detected ejecta dust grew to no more than a few times 10-4 M sun. We also provide evidence that the ejecta dust formed in comoving clumps of fixed size. We argue that, after about two years past explosion, the appearance of wide, box-shaped optical line profiles was due to the impact of the ejecta on the progenitor circumstellar medium and that the subsequent formation of a cool, dense shell was responsible for a later rise in the MIR flux. This study demonstrates the rich, multifaceted ways in which a typical core-collapse supernova and its progenitor can produce and/or interact with dust grains. The work presented here adds to the growing number of studies that do not support the contention that SNe are responsible for the large mass of observed dust in high-redshift galaxies. 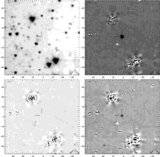