Red supergiants (RSGs) are a short-lived stage in the evolution of moderately massive stars (10-25 M sun), and as such their location in the H-R diagram provides an exacting test of stellar evolutionary models. Since massive star evolution is strongly affected by the amount of mass loss a star suffers, and since the mass-loss rates depend upon metallicity, it is highly desirable to study the physical properties of these stars in galaxies of various metallicities. Here we identify a sample of RSGs in M31, the most metal-rich of the Local Group galaxies. We determine the physical properties of these stars using both moderate resolution spectroscopy and broadband V - K photometry. We find that on average the RSGs of our sample are variable in V by 0.5 mag, smaller but comparable to the 0.9 mag found for Magellanic Cloud (MC) RSGs. No such variability is seen at K, also in accord with what we know of Galactic and MC RSGs. We find that there is a saturation effect in the model TiO band strengths with metallicities higher than solar. The physical properties we derive for the RSGs from our analysis with stellar atmosphere models agree well with the current evolutionary tracks, a truly remarkable achievement given the complex physics involved in each. We do not confirm an earlier result that the upper luminosities of RSGs depend upon metallicity; instead, the most luminous RSGs have log L/L sun~5.2-5.3, broadly consistent but slightly larger than that recently observed by Smartt et al. as the upper luminosity limit to Type II-P supernovae, believed to have come from RSGs. We find that, on average, the RSGs are considerably more reddened than O and B stars, suggesting that circumstellar dust is adding a significant amount of extra extinction, ~0.5 mag, on average. This is in accord with our earlier findings on Milky Way and Magellanic Cloud stars. Finally, we call attention to a peculiar star whose spectrum appears to be heavily veiled, possibly due to scattering by an expanding dust shell.

Observations reported here were obtained at the MMT Observatory, a joint facility of the University of Arizona and the Smithsonian Institution. 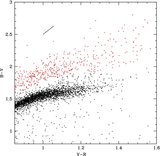