We investigate a peculiar feature at the hottest, blue end of the horizontal branch of Galactic globular cluster ω Centauri, using the high-precision and nearly complete catalog that has been constructed from a survey taken with the Advanced Camera for Survey on board the Hubble Space Telescope, that covers the inner 10 × 10 arcmin. It is a densely populated clump of stars with an almost vertical structure in the F435W-(F435W-F625W) plane, that we termed "blue clump." A comparison with theoretical models leads to the conclusion that this feature must necessarily harbor either hot flasher stars or canonical He-rich stars—progeny of the blue main sequence (MS) subpopulation observed in this cluster—or a mixture of both types, plus possibly a component from the normal-He population hosted by the cluster. A strong constraint coming from theory is that the mass of the objects in the "blue clump" has to be very finely tuned, with a spread of at most only ~0.03 M sun. By comparing observed and theoretical star counts along both the H- and He-burning stages we find that at least 15% of the expected He-rich horizontal branch stars are missing from the color-magnitude diagram. This missing population could be the progeny of red giants that failed to ignite central He-burning and have produced He-core white dwarfs (WDs). Our conclusion supports the scenario recently suggested by Calamida et al. for explaining the observed ratio of WDs to MS stars in ω Centauri. 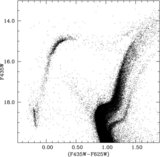