Many models for coronal loops have difficulty explaining the observed EUV brightness of the transition region, which is often significantly less than theoretical models predict. This discrepancy has been addressed by a variety of approaches including filling factors and time-dependent heating, with varying degrees of success. Here, we focus on an effect that has been ignored so far: the absorption of EUV light with wavelengths below 912 Å by the resonance continua of neutral hydrogen and helium. Such absorption is expected to occur in the low-lying transition region of hot, active region loops that is colocated with cool chromospheric features and called "moss" as a result of the reticulated appearance resulting from the absorption. We use cotemporal and cospatial spectroheliograms obtained with the Solar and Heliospheric Observatory/SUMER and Hinode/EIS of Fe XII 1242 Å, 195 Å, and 186.88 Å, and compare the density determination from the 186/195 Å line ratio to that resulting from the 195/1242 Å line ratio. We find that while coronal loops have compatible density values from these two line pairs, upper transition region moss has conflicting density determinations. This discrepancy can be resolved by taking into account significant absorption of 195 Å emission caused by the chromospheric inclusions in the moss. We find that the amount of absorption is generally of the order of a factor of 2. We compare to numerical models and show that the observed effect is well reproduced by three-dimensional radiative MHD models of the transition region and corona. We use STEREO A/B data of the same active region and find that increased angles between line of sight and local vertical cause additional absorption. Our determination of the amount of chromospheric absorption of TR emission can be used to better constrain coronal heating models. 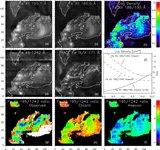