Three-Dimensional Nonlinear Evolution of a Magnetic Flux Tube in a Spherical Shell: Influence of Turbulent Convection and Associated Mean Flows

We present the first three-dimensional magnetohydrodynamics study in spherical geometry of the nonlinear dynamical evolution of magnetic flux tubes in a turbulent rotating convection zone (CZ). These numerical simulations use the anelastic spherical harmonic code. We seek to understand the mechanism of emergence of strong toroidal fields through a turbulent layer from the base of the solar CZ to the surface as active regions. To do so, we study numerically the rise of magnetic toroidal flux ropes from the base of a modeled CZ up to the top of our computational domain where bipolar patches are formed. We compare the dynamical behavior of flux tubes in a fully convective shell possessing self-consistently generated mean flows such as meridional circulation (MC) and differential rotation, with reference calculations done in a quiet isentropic zone. We find that two parameters influence the tubes during their rise through the CZ: the initial field strength and amount of twist, thus confirming previous findings in Cartesian geometry. Further, when the tube is sufficiently strong with respect to the equipartition field, it rises almost radially independently of the initial latitude (either low or high). By contrast, weaker field cases indicate that downflows and upflows control the rising velocity of particular regions of the rope and could in principle favor the emergence of flux through Ω-loop structures. For these latter cases, we focus on the orientation of bipolar patches and find that sufficiently arched structures are able to create bipolar regions with a predominantly east-west orientation. Meridional flow seems to determine the trajectory of the magnetic rope when the field strength has been significantly reduced near the top of the domain. Appearance of local magnetic field also feeds back on the horizontal flows thus perturbing the MC via Maxwell stresses. Finally differential rotation makes it more difficult for tubes introduced at low latitudes to reach the top of the domain. 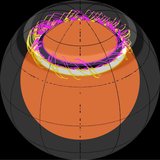