We present Spitzer Infrared Spectrograph and Infrared Array Camera observations of the young supernova remnant E0102 (SNR 1E0102-7219) in the Small Magellanic Cloud. The infrared spectra show strong lines of Ne and O, with the [Ne II] line at 12.8 μm having a large velocity dispersion of 2000-4500 km s-1 indicative of fast-moving ejecta. Unlike the young Galactic SNR Cas A, E0102 lacks emission from Ar and Fe. Diagnostics of the observed [Ne III] line pairs imply that [Ne III] emitting ejecta have a low temperature of 650 K, while [Ne V] line pairs imply that the infrared [Ne V] emitting ejecta have a high density of ~104 cm-3. We have calculated radiative shock models for various velocity ranges including the effects of photoionization. The shock model indicates that the [Ne V] lines come mainly from the cooling zone, which is hot and dense, whereas [Ne II] and [Ne III] come mainly from the photoionization zone, which has a low temperature of 400-1000 K. We estimate an infrared-emitting Ne ejecta mass of 0.04 M sun from the infrared observations, and discuss implications for the progenitor mass. The spectra also have a dust continuum feature peaking at 18 μm that coincides spatially with the ejecta, providing evidence that dust formed in the expanding ejecta. The 18 μm peak dust feature is fitted by a mixture of MgSiO3 and Si dust grains, while the rest of the continuum requires either carbon or Al2O3 grains. We measure the total dust mass formed within the ejecta of E0102 to be ~0.014 M sun. The dust mass in E0102 is thus a factor of a few smaller than that in Cas A. The composition of the dust is also different, showing relatively less silicate and likely no Fe-bearing dust, as is suggested by the absence of Fe-emitting ejecta. 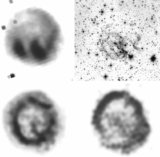