Multiwavelength observations of a sigmoidal (S-shaped) solar coronal source by the EUV Imaging Spectrometer and the X-Ray Telescope aboard the Hinode spacecraft and by the EUV Imager aboard STEREO are reported. The data reveal the coexistence of a pair of J-shaped hot arcs at temperatures T>2 MK with an S-shaped structure at somewhat lower temperatures (T ≈ 1-1.3 MK). The middle section of the S-shaped structure runs along the polarity inversion line of the photospheric field, bridging the gap between the arcs. Flux cancellation occurs at the same location in the photosphere. The sigmoid forms in the gradual decay phase of the active region, which does not experience an eruption. These findings correspond to the expected signatures of a flux rope forming, or being augmented, gradually by a topology transformation inside a magnetic arcade. In such a transformation, the plasma on newly formed helical field lines in the outer flux shell of the rope (S-shaped in projection) is expected to enter a cooling phase once the reconnection of their parent field line pairs (double-J shaped in projection) is complete. Thus, the data support the conjecture that flux ropes can exist in the corona prior to eruptive activity. 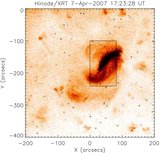