We demonstrate a significant difference in the angular momentum transport properties of galactic disks between regions in which the interstellar medium is single phase or two phase. Our study is motivated by observations of H I in extended galactic disks which indicate velocity dispersions of nonthermal origin, suggesting that turbulence in the gas may be contributing significantly to the observed dispersion. To address this, we have implemented a shearing-box framework within the FLASH code. The new code was used to perform local simulations of galactic disks that incorporate differential rotation, self-gravity, vertical stratification, hydrodynamics, and cooling. These simulations explore plausible mechanisms for driving turbulent motions via the thermal and self-gravitational instabilities coupling to differential rotation. Where a two-phase medium develops, gravitational angular momentum transporting stresses are much greater, creating a possible mechanism for transferring energy from galactic rotation to turbulence. In simulations where the disk conditions do not trigger the formation of a two-phase medium, it is found that perturbations to the flow damp without leading to a sustained mechanism for driving turbulence. The differing angular momentum transport properties of the single- and two-phase regimes of the disk suggest that a significant, dynamically motivated division can be drawn between the two, even when this division occurs far outside the star formation cutoff in a galactic disk. 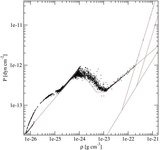