High-mass star formation and the evolution of H II regions have a substantial impact on the morphology and star formation history of molecular clouds. The H II region Gum 48d, located in the Centaurus Arm at a distance of 3.5 kpc, is an old, well evolved H II region whose ionizing stars have moved off the main sequence. As such, it represents a phase in the evolution of H II regions that is less well studied than the earlier, more energetic, main-sequence phase. In this paper, we use multiwavelength archive data from a variety of sources to perform a detailed study of this interesting region. Morphologically, Gum 48d displays a ring-like faint H II region associated with diffuse emission from the associated photodissociation region, and is formed from part of a large, massive molecular cloud complex. There is extensive ongoing star formation in the region, at scales ranging from low to high mass, which is consistent with triggered star formation scenarios. We investigate the dynamical history and evolution of this region, and conclude that the original H II region was once larger and more energetic than the faint region currently seen. The proposed history of this molecular cloud complex is one of multiple, linked generations of star formation, over a period of 10 Myr. Gum 48d differs significantly in morphology and star formation from the other H II regions in the molecular cloud; these differences are likely the result of the advanced age of the region, and its different evolutionary status. 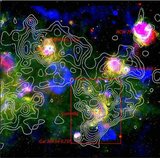