A Chandra Study of the Rosette Star-Forming Complex. II. Clusters in the Rosette Molecular Cloud

We explore here the young stellar populations in the Rosette Molecular Cloud (RMC) region with high spatial resolution X-ray images from the Chandra X-ray Observatory, which are effective in locating weak-lined T Tauri stars as well as disk-bearing young stars. A total of 395 X-ray point sources are detected, 299 of which (76%) have an optical or near-infrared (NIR) counterpart identified from deep FLAMINGOS images. From X-ray and mass sensitivity limits, we infer a total population of ~1700 young stars in the survey region. Based on smoothed stellar surface density maps, we investigate the spatial distribution of the X-ray sources and define three distinctive structures and substructures within them. Structures B and C are associated with previously known embedded IR clusters, while structure A is a new X-ray-identified unobscured cluster. A high-mass protostar RMCX #89 = IRAS 06306+0437 and its associated sparse cluster are studied. The different subregions are not coeval but do not show a simple spatial-age pattern. Disk fractions vary between subregions and are generally lsim20% of the total stellar population inferred from the X-ray survey. The data are consistent with speculations that triggered star formation around the H II region is present in the RMC, but do not support a simple sequential triggering process through the cloud interior. While a significant fraction of young stars are located in a distributed population throughout the RMC region, it is not clear if they originated in clustered environments. 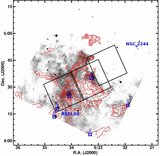