We have undertaken a deep, wide-field H I imaging survey of M31, reaching a maximum resolution of about 50 pc and 2 km s-1 across a 95 × 48 kpc region. The H I mass and brightness sensitivity at 100 pc resolution for a 25 km s-1 wide spectral feature is 1500 M sun and 0.28 K. Our study reveals ubiquitous H I self-opacity features, discernible in the first instance as filamentary local minima in images of the peak H I brightness temperature. Local minima are organized into complexes of more than kpc length and are particularly associated with the leading edge of spiral arm features. Just as in the Galaxy, there is only patchy correspondence of self-opaque features with CO(1-0) emission. We have produced images of the best-fit physical parameters: spin temperature, opacity-corrected column density, and nonthermal velocity dispersion, for the brightest spectral feature along each line of sight in the M31 disk. Spectroscopically opaque atomic gas is organized into filamentary complexes and isolated clouds down to 100 pc. Localized opacity corrections to the column density exceed an order of magnitude in many cases and add globally to a 30% increase in the atomic gas mass over that inferred from the integrated brightness under the usual assumption of negligible self-opacity. Opaque atomic gas first increases from 20 to 60 K in spin temperature with radius to 12 kpc but then declines again to 20 K beyond 25 kpc. We have extended the resolved star formation law down to physical scales more than an order of magnitude smaller in area and mass than has been possible previously. The relation between total gas mass and star formation rate density is significantly tighter than that with molecular mass and is fully consistent in both slope and normalization with the power-law index of 1.56 found in the molecule-dominated disk of M51 at 500 pc resolution. Below a gas mass density of about 5 M sun pc-2, there is a downturn in star formation rate density which may represent a real local threshold for massive star formation at a cloud mass of about 5 × 104 M sun. 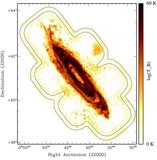