The Role of Stellar Feedback in the Formation of Galaxies

Although supernova (SN) explosions and stellar winds happen at very small scales, they affect the interstellar medium (ISM) at galactic scales and regulate the formation of a whole galaxy. Previous attempts of mimicking these effects in simulations of galaxy formation use very simplified assumptions. We develop a much more realistic prescription for modeling the feedback, which minimizes any ad hoc subgrid physics. We start with developing high-resolution models of the ISM and formulate the conditions required for its realistic functionality: formation of multiphase medium with hot chimneys, superbubbles, cold molecular phase, and very slow consumption of gas. We find that this can be achieved only by doing what the real universe does: formation of dense (>10 H atoms cm-3), cold (T ≈ 100 K) molecular phase, where the star formation happens, and which young stars disrup. Another important ingredient is the effect of runaway stars: massive binary stars ejected from molecular clouds when one of the companions becomes an SN. Those stars can move to 10-100 pc away from molecular clouds before exploding themselves as SNe. This greatly facilitates the feedback. Once those effects are implemented into cosmological simulations, galaxy formation proceeds more realistically. For example, we do not have the overcooling problem. The angular momentum problem (resulting in a too massive bulge) is also reduced substantially: the rotation curves are nearly flat. The galaxy formation also becomes more violent. Just as often observed in quasar absorption lines, there are substantial outflows from forming and active galaxies. At high redshifts we routinely find gas with few hundred km s-1 and occasionally 1000-2000 km s-1. The gas has high metallicity, which may exceed the solar metallicity. The temperature of the gas in the outflows and in chimneys can be very high: T = 107-108 K. The density profile of dark matter is still consistent with a cuspy profile. The simulations reproduce this picture only if the resolution is very high: better than 50 pc, which is 10 times better than the typical resolution in previous cosmological simulations. Our simulations of galaxy formation reach the resolution of 35 pc. 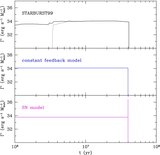