Observations of the Naked-Eye GRB 080319B: Implications of Nature's Brightest Explosion

The first gamma-ray burst (GRB) confirmed to be bright enough to be seen with the naked eye, GRB 080319B at redshift z = 0.937, allowed for exquisite follow-up observations across the electromagnetic spectrum. We present our detailed optical and infrared (IR) observations of the afterglow, consisting of over 5000 images starting 51 s after the GRB trigger, in concert with our own analysis of the Swift UVOT, Burst Alert Telescope (BAT), and XRT data. The event is extreme not only in observed properties but also intrinsically: it was the most luminous event ever recorded at optical and IR wavelengths and had an exceedingly high isotropic-equivalent energy release in γ-rays. At early times, the afterglow evolution is broadly consistent with being reverse-shock dominated, but then is subsumed by a forward shock at around 1000 s. The overall spectral energy distribution, spanning from ultraviolet through near-IR wavelengths, shows no evidence for a significant amount of dust extinction in the host frame. The afterglow evolution, however, is highly chromatic: starting at about 1000 s the index shifts blueward before shifting back to the red at late times. In our deepest late-time observations, we find tentative evidence for an optical jet break and a luminous supernova. Finally, we examine the detectability of such events with current and future facilities and find that such an event could be detected in gamma rays by BAT out to z = 10.7 (8σ), while the nominal EXIST sensitivity would allow detection to z ≈ 32. At the K band, this source would have been easily detected with meter-class telescopes to z ≈ 17. 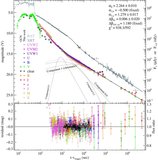