A subset of the RR Lyrae (RRL) candidates identified from the Southern Edgeworth-Kuiper Belt Object (SEKBO) survey data have been followed up photometrically (n = 106) and spectroscopically (n = 51). Period and light curve fitting reveals a 24% ± 7% contamination of SEKBO survey data by non-RRLs. This paper focuses on the region of the Virgo Stellar Stream (VSS), particularly on its extension to the south of the declination limits of the Sloan Digital Sky Survey and of the Quasar Equatorial Survey Team RRL survey. The distribution of radial velocities in the Galactic standard of rest frame (V GSR) for the 11 RRLs observed in the VSS region has two apparent peaks. The larger peak coincides with the four RRLs having langV GSRrang = 127 ± 10 km s-1 and dispersion σ = 27 km s-1, marginally larger than that expected from the errors alone. The two type ab RRLs in this group have lang[Fe/H]rang = -1.95 ± 0.1. Both the radial velocities and metal abundances are consistent with membership in the VSS. The second velocity peak, which occurs at langV GSRrang = -175 ± 10 km s-1 may indicate the presence of stars from the Sgr leading tidal tail, which is expected to have large negative velocities in this region. We explore the spatial extent of the VSS by constructing luminosity functions from the SEKBO data and comparing them to data synthesized with the Besançon Galactic model. Analysis of the excess over the model predictions reveals the VSS as a large (~760 deg2) overdensity centered at roughly (R.A., decl.) ~ (186°, -4°), spanning a length of ~15 kpc in projection, assuming a heliocentric distance of 19 kpc. The data reveal for the first time the more southern regions of the stream and trace it to decl. ≈-15° and Galactic latitudes as low as b ≈ 45°. 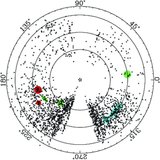