We present absolute parallaxes and relative proper motions for the central stars of the planetary nebulae NGC 6853 (The Dumbbell), NGC 7293 (The Helix), Abell 31, and DeHt 5. This paper details our reduction and analysis using DeHt 5 as an example. We obtain these planetary nebula nuclei (PNNi) parallaxes with astrometric data from Fine Guidance Sensors FGS 1r and FGS 3, white-light interferometers on the Hubble Space Telescope. Proper motions, spectral classifications and VJHKT2M and DDO51 photometry of the stars comprising the astrometric reference frames provide spectrophotometric estimates of reference star absolute parallaxes. Introducing these into our model as observations with error, we determine absolute parallaxes for each PNN. Weighted averaging with previous independent parallax measurements yields an average parallax precision, σπ/π = 5%. Derived distances are: d NGC 6853 = 405+28 -25 pc, d NGC 7293 = 216+14 -12 pc, d Abell 31 = 621+91 -70 pc, and d DeHt 5 = 345+19 -17 pc. These PNNi distances are all smaller than previously derived from spectroscopic analyses of the central stars. To obtain absolute magnitudes from these distances requires estimates of interstellar extinction. We average extinction measurements culled from the literature, from reddening based on PNNi intrinsic colors derived from model SEDs, and an assumption that each PNN experiences the same rate of extinction as a function of distance as do the reference stars nearest (in angular separation) to each central star. We also apply Lutz-Kelker bias corrections. The absolute magnitudes and effective temperatures permit estimates of PNNi radii through both the Stefan-Boltzmann relation and Eddington fluxes. Comparing absolute magnitudes with post-AGB models provides mass estimates. Masses cluster around 0.57 M_{⊙}, close to the peak of the white dwarf mass distribution. Adding a few more PNNi with well-determined distances and masses, we compare all the PNNi with cooler white dwarfs of similar mass, and confirm, as expected, that PNNi have larger radii than white dwarfs that have reached their final cooling tracks.

Based on observations made with the NASA/ESA Hubble Space Telescope, obtained at the Space Telescope Science Institute, which is operated by the Association of Universities for Research in Astronomy, Inc., under NASA contract NAS5-26555. 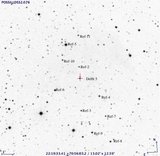