We have identified 4659 variable objects in the Northern Sky Variability Survey. We have classified each of these objects into one of the five variable star classes: (1) Algol/β Lyr systems including semidetached, and detached eclipsing binaries, (2) W Ursae Majoris overcontact and ellipsoidal variables, (3) long-period variables such as Cepheid and Mira-type objects, (4) RR Lyr pulsating variables, and (5) short-period variables including δ Scuti stars. All the candidates have outside of eclipse magnitudes of ~10-13. The primary classification tool is the use of Fourier coefficients combined with period information and light-curve properties to make the initial classification. Brief manual inspection was done on all light curves to remove nonperiodic variables that happened to slip through the process and to quantify any errors in the classification pipeline. We list the coordinates, period, Two Micron All Sky Survey colors, total amplitude variation, and any previous classification of the object. 548 objects previously identified as Algols in our previous paper are not included here. 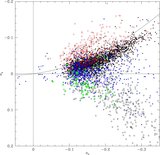