We present the results of high angular resolution adaptive optics (AO) near-infrared (JHKs ) observations of the deeply embedded massive cluster RCW 38 using NACO on the Very Large Telescope. Narrowband AO observations centered at wavelengths of 1.28 μm, 2.12 μm, and 2.17 μm were also obtained. The area covered by these observations is about 0.5 pc2, centered on the O-star RCW 38 IRS 2. We use the JHKs colors to identify young stars with infrared (IR) excess in this region. Through a detailed comparison to a nearby control field, we find that most of the 337 stars detected in all three IR bands are cluster members (~317), with essentially no contamination due to background (likely due to the high cluster extinction of AV ~ 15) or foreground sources. Five sources with three band detections have colors suggestive of deeply embedded protostars, while 53 sources are detected at Ks only; their spatial distribution with respect to the extinction suggests they are highly reddened cluster members but their evolutionary status is unclear. Detectable Ks -band excess is found toward 29% ± 3% of the stars. For comparison to a similar area of Orion Nebula Cluster observed in the near-IR, mass and extinction cuts are applied, and the excess fractions redetermined. The resulting excesses are then 25% ± 5% for RCW 38, and 42% ± 8% for Orion. RCW 38 IRS 2 is shown to be a massive star binary with a projected separation of ~500 AU. Two regions of molecular hydrogen emission are revealed through the 2.12 μm imaging. One of these shows a morphology suggestive of a protostellar jet, and is clearly associated with a star only detected at H and Ks , and previously identified as a highly obscured X-ray source. Three spatially extended cometary-like objects, suggestive of photoevaporating disks, are identified, but only one is clearly directly influenced by RCW 38 IRS 2. The structure of the inner core of RCW 38 is also characterized and compared to Orion and other clusters. A King profile provides a reasonable fit to the cluster radial density profile and a nearest-neighbor distance analysis shows essentially no subclustering.

Based on observations performed at the European Southern Observatory Very Large Telescope on Cerro Paranal, Chile, under program ID 70.C-0400(A). 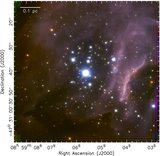