We present 1.4-2.5 μm integral field spectroscopy of 16 stars in the Braid Nebula star formation region in Cygnus OB7. These data form one aspect of a large-scale multiwavelength survey aimed at determining an unbiased estimate of the number, mass distribution, and evolutionary state of the young stars within this 1 deg2 area of the previously poorly studied Lynds 1003 molecular cloud. Our new spectroscopic data, when combined with Two Micron All Sky Survey near-IR photometry, provide evidence of membership of many of these objects in the regions' pre-main-sequence population. We discuss both the characteristics of the young stars found in the region and the level of starforming activity present. 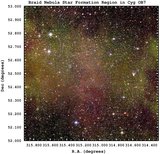