The Variable Stars of the Draco Dwarf Spheroidal Galaxy: Revisited

We present a CCD survey of variable stars in the Draco dwarf spheroidal galaxy. This survey, which has the largest areal coverage since the original variable star survey by Baade & Swope, includes photometry for 270 RR Lyrae (RRL) stars, 9 anomalous Cepheids (ACs), 2 eclipsing binaries, and 12 slow, irregular red variables, as well as 30 background QSOs. Twenty-six probable double-mode RRL stars were identified. Observed parameters, including mean V and I magnitudes, V amplitudes, and periods, have been derived. Photometric metallicities of the ab-type RRL stars were calculated according to the method of Jurcsik & Kovacs, yielding a mean metallicity of lang[Fe/H]rang = -2.19 ± 0.03. The well-known Oosterhoff intermediate nature of the RRL stars in Draco is reconfirmed, although the double-mode RRL stars, with one exception, have properties similar to those found in Oosterhoff type II globular clusters. The period-luminosity relation of the ACs is rediscussed with the addition of the new Draco ACs. 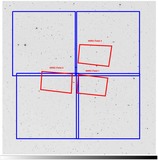