Recent advances in the determinations of the positions (pitch angle, shape, numbers, interarm separation) and velocities (rotation curve) of the spiral arms are evaluated and compared to previous determinations. Based on these results, an average cartographic model is developed that fits the means of basic input data and provides predictions for the locations of the arms in the Milky Way, for each galactic quadrant. For each spiral arm segment in each galactic quadrant, the LSR radial velocities are calculated for the radial distance as well as for its galactic longitude. From our velocimetric model, arm intercepts (between line of sights and spiral arms) are indicated in velocity space and may be used to find the distance and velocity to any arm, in a given longitude range. Velocity comparisons between model predictions and published CO velocity distribution are done for each galactic quadrant, with good results. Our velocimetric model is not hydromagnetic in character, nor is it a particle-simulation scheme, yet it is simple to use for comparisons with the observations and it is in symbiosis and consistent with our cartographic model (itself simple to use for comparisons with observations). A blending in velocity of the Perseus and Cygnus arms is further demonstrated, as well as an apparent longitude-velocity blending of the starting points of the four spiral arms near 4 kpc (not a physical ring). An integrated (distance, velocity) model for the mass in the disk is employed, to yield the total mass of 3.0 × 1011 M Sun within a galactic radius of 28 kpc. 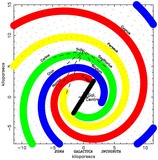