Deep F555W and F814W Hubble Space Telescope (HST ) Advanced Camera for Survey (ACS) images are the basis for a study of the present-day mass function (PDMF) of NGC 346, the largest active star-forming region in the Small Magellanic Cloud (SMC). We find a PDMF slope of Γ = -1.43 ± 0.18 in the mass range 0.8-60 Msun, in excellent agreement with the Salpeter initial mass function (IMF) in the solar neighborhood. Caveats on the conversion of the PDMF to the IMF are discussed. The PDMF slope changes, as a function of the radial distance from the center of the NGC 346 star cluster, indicating a segregation of the most massive stars. This segregation is likely primordial considering the young age (~ 3 Myr) of NGC 346, and its clumpy structure which suggests that the cluster has likely not had sufficient time to relax. Comparing our results for NGC 346 with those derived for other star clusters in the SMC and the Milky Way (MW), we conclude that, while the star formation process might depend on the local cloud conditions, the IMF does not seem to be affected by general environmental effects such as galaxy type, metallicity, and dust content.

Based on observations with the NASA/ESA Hubble Space Telescope, obtained at the Space Telescope Science Institute, which is operated by AURA Inc., under NASA contract NAS 5-26555. 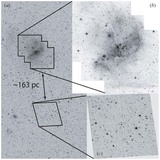