The near-infrared spectrum of (50000) Quaoar obtained at the Keck Observatory shows distinct absorption features of crystalline water ice, solid methane, and ethane, and possibly other higher order hydrocarbons. Quaoar is only the fifth Kuiper Belt object (KBO) on which volatile ices have been detected. The small amount of methane on an otherwise water ice-dominated surface suggests that Quaoar is a transition object between the dominant volatile-poor small KBOs and the few volatile-rich large KBOs such as Pluto and Eris. 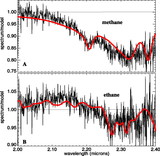