We use new interior models of cold planets to investigate the mass-radius relationships of solid exoplanets, considering planets made primarily of iron, silicates, water, and carbon compounds. We find that the mass-radius relationships for cold terrestrial mass planets of all compositions we considered follow a generic functional form that is not a simple power law: log10Rs=k1+1/3log10(Ms)-k2Mk3s for up to Mp~20 M⊕, where Ms and Rs are scaled mass and radius values. This functional form arises because the common building blocks of solid planets all have equations of state that are well approximated by a modified polytrope of the form ρ=ρ0+cPn. We find that highly detailed planet interior models, including temperature structure and phase changes, are not necessary to derive solid exoplanet bulk composition from mass and radius measurements. For solid exoplanets with no substantial atmosphere we have also found the following: with 5% fractional uncertainty in planet mass and radius it is possible to distinguish among planets composed predominantly of iron or silicates or water ice but not more detailed compositions; with ~5% uncertainty water ice planets with >~25% water by mass may be identified; the minimum plausible planet size for a given mass is that of a pure iron planet; and carbon planet mass-radius relationships overlap with those of silicate and water planets due to similar zero-pressure densities and equations of state. We propose a definition of ``super-Earths'' based on the clear distinction in radii between planets with significant gas envelopes and those without. 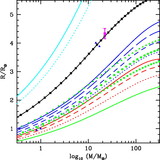