We here develop an improved way of using a rotating star as a clock, set it using the Sun, and demonstrate that it keeps time well. This technique, called gyrochronology, derives ages for low-mass main-sequence stars using only their rotation periods and colors. The technique is developed here and used to derive ages for illustrative groups of nearby field stars with measured rotation periods. We first demonstrate the reality of the interface sequence, the unifying feature of the rotational observations of cluster and field stars that makes the technique possible, and extend it beyond the proposal of Skumanich by specifying the mass dependence of rotation for these stars. We delineate which stars it cannot currently be used on. We then calibrate the age dependence using the Sun. The errors are propagated to understand their dependence on color and period. Representative age errors associated with the technique are estimated at ~15% (plus possible systematic errors) for late F, G, K, and early M stars. Gyro ages for the Mount Wilson stars are shown to be in good agreement with chromospheric ages for all but the bluest stars, and probably superior. Gyro ages are then calculated for each of the active main-sequence field stars studied by Strassmeier and collaborators. These are shown to have a median age of 365 Myr. The sample of single field stars assembled by Pizzolato and collaborators is then assessed and shown to have gyro ages ranging from under 100 Myr to several Gyr, with a median age of 1.2 Gyr. Finally, we demonstrate that the individual components of the three wide binaries ξ Boo AB, 61 Cyg AB, and α Cen AB yield substantially the same gyro ages. 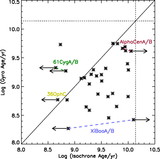