Two different multivariate clustering techniques, the K-means partitioning method and the Dirichlet process of mixture modeling, have been applied to the BATSE gamma-ray burst (GRB) catalog, to obtain the optimum number of coherent groups. In the standard paradigm, GRBs are classified into only two groups, the long and short bursts. However, for both of the clustering techniques, the optimal number of classes was found to be three, a result that is consistent with previous statistical analysis. In this classification, the long bursts are further divided into two groups that are primarily differentiated by their total fluence and duration and hence are called low- and high-fluence GRBs. Analysis of GRBs with known redshifts and spectral parameters suggests that low-fluence GRBs have nearly constant isotropic energy output of 1052 ergs, while for the high-fluence ones the energy output ranges from 1052 to 1054 ergs. It is speculated that the three kinds of GRBs reflect three different origins: mergers of neutron star systems, mergers between white dwarfs and neutron stars, and collapse of massive stars. 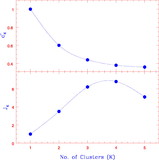